Between 2000 and 2014, American rates of death from opioid overdose have tripled from three deaths per 100,000 people to nine per 100,000. That adds up to 28,647 deaths in 2014. While the number of heroin overdoses has made a rapid climb, the majority of the lethal overdoses involve prescription opioids  –  and the heroin crisis is closely tied to prescription drugs, since many users become addicted to a prescription opioid before switching to the street drug. In March 2015, U.S. Department of Health & Human Services Secretary Sylvia M. Burwell announced an initiative targeting three priority areas to tackle the opioid epidemic and help save lives. These include: improving prescribing practices, expanding access to and the use of medication-assisted treatment, and expanding the use of naloxone.

The abuse of opioids, a group of drugs that  includes heroin and prescription painkillers has had a devastating impact on public health in this country. According to the CDC approximately 100 Americans died from drug overdose every day in 2010. Prescription drugs were involved in well over half of the 38,300 recorded fatal overdoses and opioid pain relievers were involved in 16,600 of those deaths. 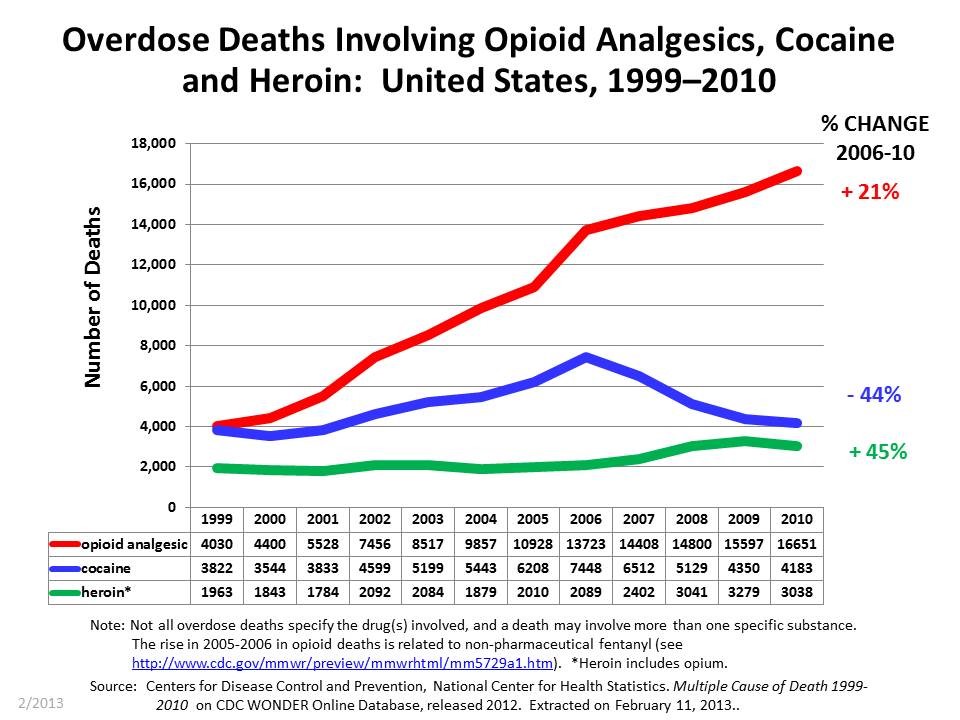 Research shows that many non-medical users obtain prescription medications from family and friends. 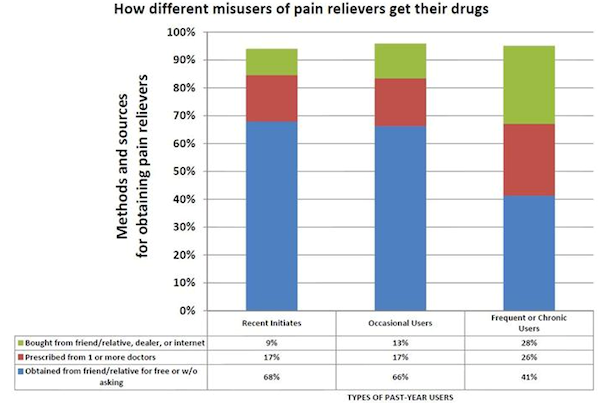 Today, more Americans die from drug overdoses than car crashes or gun fatalities. In total, drug overdoses killed 47,000 people in the United States in 2014, the latest year for which data is available. That’s 130 deaths per day, on average.

Between 1999 and 2014, the overdose epidemic spread from a few concentrated pockets in Appalachia and northern New Mexico to nearly every corner of America. The opioid overdose crisis began early in central Appalachia, a region encompassing much of West Virginia and eastern Kentucky. The largely rural area – dominated by physically taxing industries, including coal mining, agriculture and timbering – was susceptible to the pain-relief promise of prescription opioids such as OxyContin and Vicodin. These painkillers were aggressively marketed throughout the 1990s and early 2000s. As prescriptions proliferated, so did misuse and abuse. In central Appalachia, as in many parts of the country, the prescription painkiller epidemic also fuelled the influx of a cheap, alternative opioid: heroin. As painkiller-related deaths began to fall in the early 2010s following federal and state crackdowns on prescription opioids, heroin-related deaths began to rise.

In the west, New Mexico showed earliest signs of the looming overdose crisis, but Utah was not far behind. The state’s overdose death rate climbed steadily during the early 2000s, driven by growing prescription opioid dependence. But Utah lawmakers took action early. In 2007, they established a two-year public health-based program to combat painkiller misuse. Over the next three years, prescription opioid-related overdose deaths dropped more than 25%, but the success was short lived. After funding ran out in 2010, deaths began to climb again. Drug overdose deaths in Utah continue to be fueled by prescription painkiller misuse, often in combination with other depressant drugs . Though heroin deaths have made a smaller impact in the state, they are also on the rise. Now, six years after the Prescription Pain Medication Program program ended, the Utah house of representatives declared drug overdose deaths to be a public health emergency, and passed a slate of new public health measures, including the legalization of needle-exchange programs. 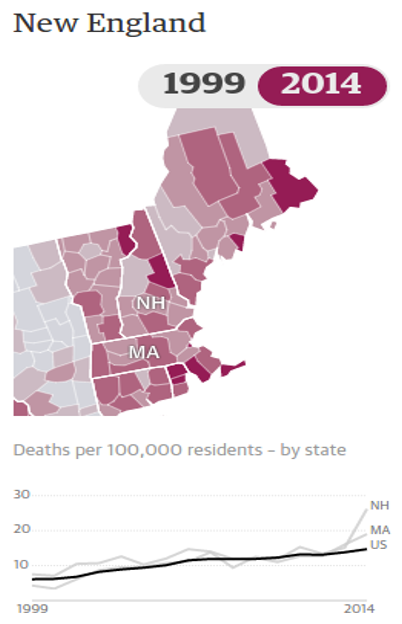 New England is grappling with a more recent scourge. Since 2013, New Hampshire, Massachusetts, and other north-eastern states have seen large spikes in overdose deaths attributed to increasing heroin use and the introduction of a new deadly drug: Fentanyl. Fentanyl, a synthetic opioid 50 times more potent than heroin, first appeared in the region around 2012, making its way down from Canada. Suppliers often cut the drug into heroin or other substances before selling it to users who may not know exactly what they’re buying. Because of its strength – and users’ unfamiliarity with it – fentanyl has proven particularly deadly.

In the face of these new challenges, Massachusetts and other north-eastern states have begun to expand prevention efforts and access to treatment programs. Naloxone, a drug that can reverse opioid overdoses, has become more widely available throughout the region and local harm-reduction initiatives are being tested.

Meanwhile, Fentanyl has surfaced in several more states, including Ohio and Florida.

Florida, once known as the prescription drug capital of America. began cracking down on “pills mill” clinics in 2010. Soon after, the state’s drug overdose death rate took a downward turn, declining through 2013.But by 2014, deaths were inching back up in Florida too.

Florida did a good job of cracking down on the supply side, but at the same time they actually cut treatment funding. Not addressing the demand side of the problem has contributed to the continuing of the epidemic.

Though postponed for a few years, Florida’s overdose crisis has progressed along a familiar pattern: a wave of prescription opioid abuse followed by heroin and, soon after, fentanyl.

More recently, fentanyl has cropped up in a previously unseen form: fake Xanax pills. The “death pills”, as they have become known, have also been found in California, Indiana and other parts of the mid-west. 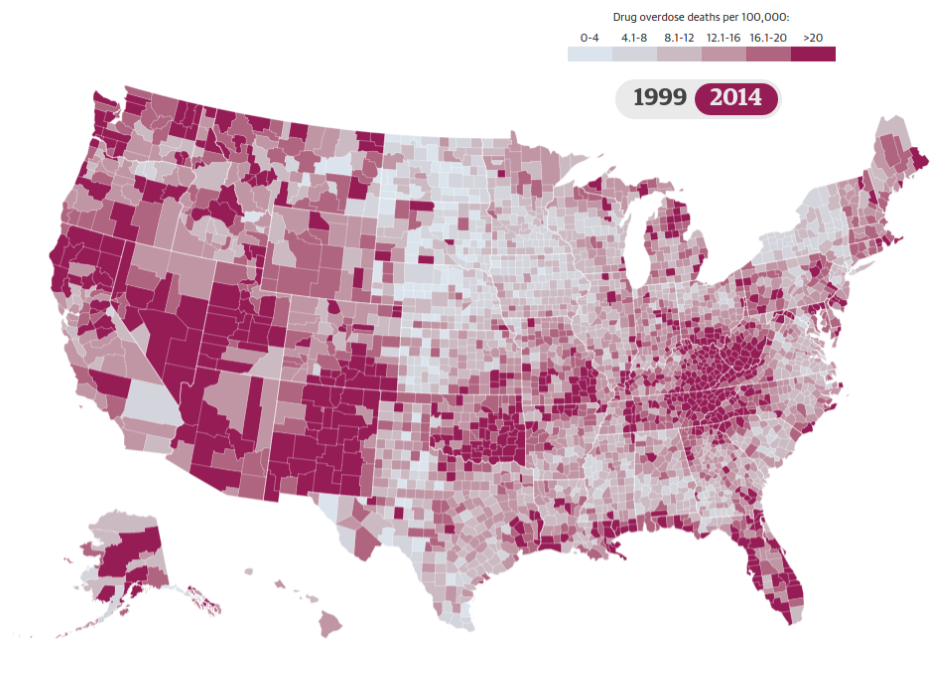 In October 2015, the President issued a Memorandum to Federal Departments and Agencies directing important steps to combat the prescription drug abuse and heroin epidemic. You can find it here.

In March 2016 HHS awarded $94 million to health centers in Affordable Care Act funding to help treat the prescription opioid abuse and heroin epidemic in America. This funding covers 271 health centers in 45 states, the District of Columbia, and Puerto Rico to improve and expand the delivery of substance abuse services in health centers, with a specific focus on treatment of opioid use disorders in underserved populations.

Administered by the HHS Health Resources and Services Administration (HRSA), these awards to health centers across the country will increase the number of patients screened for substance use disorders and connected to treatment, increase the number of patients with access to MAT for substance use disorders and opioid treatment, and provide training and educational resources to help health professionals make informed prescribing decisions. This $94 million investment is expected to help awardees hire approximately 800 providers to treat nearly 124,000 new patients.

Research demonstrates that a whole-patient approach to treatment through a combination of medication and counseling and behavioral therapies is most successful in treating opioid use disorders. In 2014, over 1.3 million people received behavioral health services at health centers, This represents a 75 percent increase since 2008 and was made possible with support from the Affordable Care Act (ACA) and the Recovery Act.

If you can’t stop taking a drug even if you want to, or if the urge to use drugs is too strong to control, even if you know the drug is causing harm, you might be addicted to opiates. Are you thinking about opioid treatment? Here are some questions to ask yourself: