The opioid use and heroin addiction epidemic

Imagine waking up one day to realize you are not the person you thought you were. You remember telling yourself that there’s no way you would ever use a high-risk drug like heroin. Yet, over and over again, you gamble with your life by using opioids. Maybe, you tried to quit heroin, but every day is a painful struggle when you try to live without it.

This relentless battle is a reality for many Americans who are trapped in a cycle of heroin addiction. According to the Centers for Disease Control and Prevention, heroin use shot up by 63 percent between 2002 and 2013, and heroin overdose was a factor in more than 8,200 deaths in 2013. The heroin epidemic has also shifted from low-income urban areas to affluent communities and suburbs. The question is why are so many people turning to heroin, and what can the public do to encourage drug users to get the help they need?

The Path From Painkillers to Heroin

Opioids appeal to recreational drug users for both pain and pleasure. They attach to receptors in the nervous system and temporarily block their perception of pain, relieving physical discomfort and providing a feeling of ease. The body also contains receptors that regulate the effects of opioids, but repeated use of the drug inhibits these receptors. Frequent drug users develop a tolerance to opioids and continually increase their intake to satisfy the need for relief. At the same time, the inhibition of important receptors leads to withdrawal whenever an individual tries to quit heroin usage. 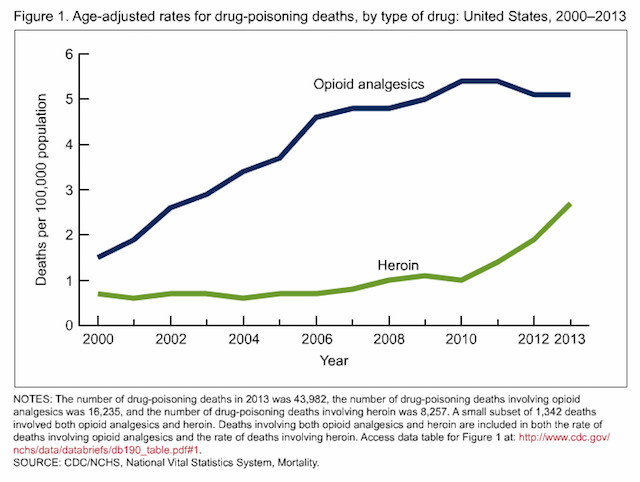 Sadly, for the growing numbers of people fighting addiction, the path to heroin use often begins at the doctor’s office. Prescription opioids, such as Vicodin and OxyContin, are used to treat chronic pain from injuries, surgeries and illnesses, and their chemical properties are similar to heroin. Patients with no history of substance abuse can easily become dependent on prescription painkillers, and as their tolerance for the drugs increases, they take more pills to control pain symptoms.

When patients can’t get another prescription from their doctors, they look for other sources and risk misusing the opioids or taking them much longer than recommended. They may even steal prescription drugs from parents and friends or crush pills to snort or inject them for a more intense high. When prescription painkillers becomes too expensive, people turn to heroin, which only costs about one-tenth of the price. The CDC reports that prescription opioid addicts are 40 times more susceptible to heroin addiction.

Medical centers are seeing a growing trend of affluent professionals seeking treatment to quit heroin. Many of these people view addiction as a private, disgraceful situation, and they are afraid of losing their families, friends, jobs and reputations if their shameful secrets are revealed. While doctors try to prevent painkiller addiction by regulating prescriptions, these measures only increase the number of heroin users.

To help drug users quit heroin, state public health organizations must devote more resources to educating the public and provide affordable treatment options. Families and friends who suspect someone of having a painkiller addiction should look for stashes of unpackaged pills or stolen prescription bottles. Instead of being accusatory toward suspected drug users, encourage them to be honest, and consult with a professional to learn more about treatment programs.

Previous:
The Dangers of Drugged Driving
Next:
Treating addiction like other chronic diseases (diabetes)