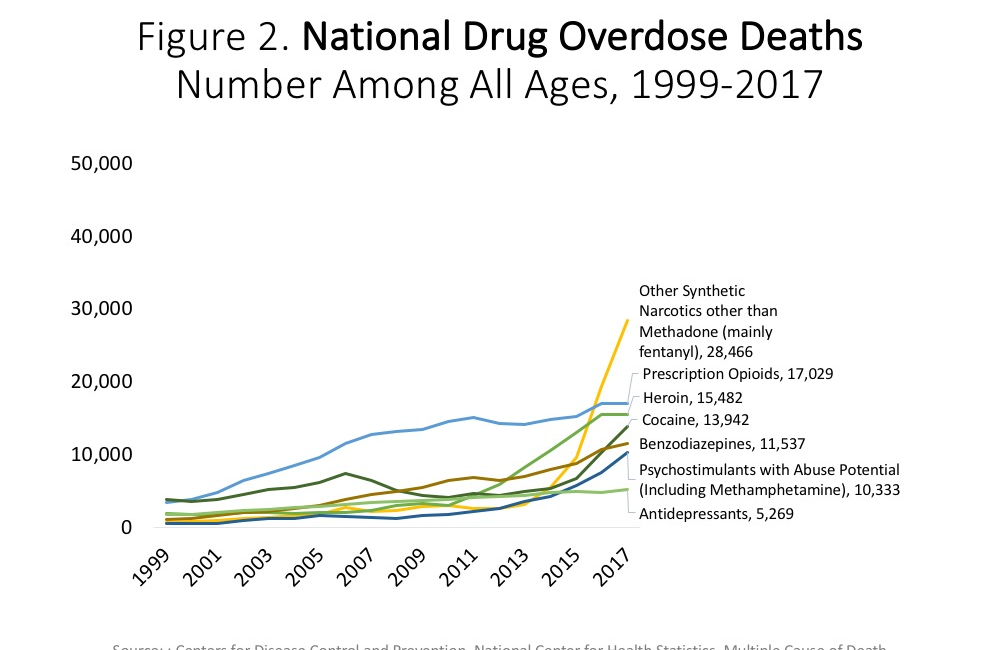 In case you didn’t know, opioids are killing America. From 1999 to 2017 in the US, approximately 400,000 people died from an opioid overdose. That’s about how many Americans died during World War II. The war isn’t on drugs; the war is on us.

Fentanyl and heroin lead the attack. Combined, they account for about 40% of all lethal drug overdoses. Heroin is obviously illicit, illegal, and known to all as perhaps the most dangerous drug. Fentanyl, however, is medically legal. It’s sometimes used as an anesthetic in severe surgeries. It’s also around fifty times stronger than heroin. It’s also being laced into heroin (and other powder-based drugs) by drug cartels and their dealers. Hence the recent spike in deaths.

The picture below comes to us from the CDC, and it’s worth at least a thousand words. 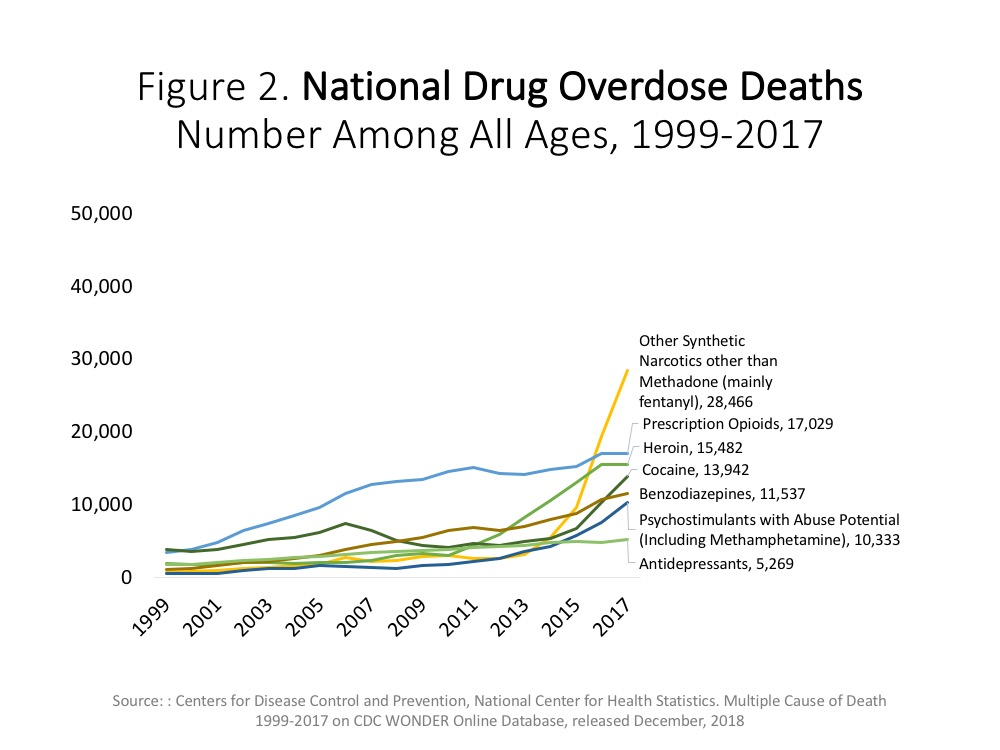 What likely first draws your eye is the sharp yellow spike, which represents (mostly) fentanyl overdose deaths. Since about 2014, the extremely potent fentanyl has continued to be laced into heroin, pills, cocaine, and likely other drugs, marketed by dealers as strong product. However, since literally one quarter of one milligram (0.25mg) of pure fentanyl can kill a full-grown man, it’s become quite the killer.

From Pain Pills to a Needle

The National Institute on Drug Abuse published an article last year with the title: ‘Prescription opioid use is a risk factor for heroin use’. It’s more than a risk factor. According to the article, using data from 2002 to 2012, those who had used opioid pain relievers were 19 times more likely to eventually begin using heroin than those who never had used such pain relievers. Even more alarming is the fact that 86% of heroin users began with prescription opioids.

From the 1960s to the 1990s, heroin users started primarily with heroin. Then, from the early 90s on, prescription pills more and more became the gateway to heroin. Now, pills are killing more people than heroin, but they are also leading people to heroin, which is causing horrifying amounts of fentanyl overdoses. Okay, so opioid pills are the problem… how did it get to be like this?

The path from pain pills to a needle is paved with pharmaceutical companies, uninformed/ignorant doctors, greedy insurance companies, and susceptible people who become victims of addiction.

The real story is that starting in the 1990s, drug companies launched a well-funded and misleading campaign promoting opioids to doctors. From 1996 to 2002, to push its new drug called OxyContin, manufacturer Purdue Pharma “funded more than 20,000 pain-related educational programs through direct sponsorship or financial grants and launched a multifaceted campaign to encourage long-term use of [opioid painkillers] for chronic non-cancer pain. As part of this campaign, Purdue provided financial support to the American Pain Society, the American Academy of Pain Medicine, the Federation of State Medical Boards, the Joint Commission, pain patient groups, and other organizations. In turn, these groups all advocated for more aggressive identification and treatment of pain, especially the use of [opioid painkillers],” according to an academic article published in Annual Reviews.

Basically, Purdue Pharma was trying to push its product as a safe method for treating long-term chronic pain, when in reality the product was a dangerous and addictive opioid. As you read, a big part of their campaign for OxyContin involved lining pockets and spreading false information. Would you believe part of the campaign was plush toys? Purdue Pharma went so far as to produce and hand out multi-tools, pens, mugs, hats, clocks, plush toys, gym bags, and even a swing music CD, all adorned with the logo for OxyContin.

Once doctors were swindled into utilizing OxyContin as a means of pain treatment, the money began to flow. Purdue Pharma was selling boatloads of their drug. Insurance companies were profiting because pills are far more profitable than physical therapy. Doctors were finding OxyContin to be a miraculous and effective solution to patients’ pain. Everybody was winning except the patients themselves.

Since then, it’s only become worse. As more and more people are given opioids, more and more addicts are born. Doctors continue to become complacent in prescribing them, which has led to serious over-prescribing. (More on this later.) Insurance companies continue to benefit from costly plans that dole out cheap-to-make pills as answers. There are countless different prescription opioids now, all being promoted heavily. Then there is the issue with lobbying.

Big pharma has spent two and a half billion dollars lobbying the government over the last decade. Most lobbying has been aimed at keeping drug prices high. The pharmaceutical industry is literally one of the largest special interest groups in the lobbying world of Washington DC.

It goes like this… people are always going to hurt. The second most common reason Americans visit doctors is a pain. Big pharma sells pills that take the pain away. Doctors must prescribe these pills, so big pharma promotes them and wins doctors over nationwide. Patients complain of pain, are given drugs, and feel much less pain, but also something else: a high. Opioids like oxycodone and hydrocodone are legal, yes, but also extremely popular street drugs. They make you feel euphoric and woozy; this author once had a facial injury and was given such drugs and knows firsthand. Luckily this author did not become addicted, but it was quite easy to see how someone would – especially if he or she were in worse pain than this author was at the time.

So that’s the real story. Well, that’s half of the story. You know now that opioids were flooded into our streets by means of prescription, which began with big pharma pushing their products to doctors. You might not know exactly to what extent our streets are flooded.

There’s a good reason you might not know. The vast majority of Americans had no idea until last month when The Washington Post reported figures from something called ARCOS. Are you sitting down? You’ll want to if you’re not already because what you’re about to read is simply astonishing.

ARCOS stands for Automation of Reports and Consolidated Order System, and it is a database maintained by the DEA (Drug Enforcement Administration). Among surely many other things, ARCOS tracked every single opiate-based painkiller prescribed in the US from 2006 to 2012.

Maybe you remember reading this earlier in the article, but over those seven years, more than 76 billion pills were issued to Americans. That’s enough for a bottle of pills for every single American alive. Yes, big pharma promoted a dangerous product. Yes, doctors over-prescribed the product and may even continue to today. But two practices also contribute to this figure: doctor shopping and patient brokering.

Doctor shopping occurs when someone seeking opioids will visit several different doctors, acquiring multiple prescriptions along the way. Patient brokering is a little more complicated. It occurs when a corrupt healthcare facility hires someone, (the broker), to seek out an addict with health insurance. Once the addict is discovered, he or she is sent to the healthcare facility by the patient broker. Sometimes the addict is in on the scheme and will receive compensation. Other times, the addict will believe he or she is genuinely receiving the necessary help to get started on becoming sober.

Once the addict is signed up for a treatment program within the corrupt facility, the true scamming begins. The patient’s health insurance is billed for numerous tests and/or services, most of which are either pointless or don’t even happen. Examples include acupuncture, urine testing, and various forms of therapy.

Once the insurance company funds these procedures, the money is pocketed by all of those involved. We’re talking about tens of thousands of dollars, too. Rehabilitation is expensive – all aspects of it – and much because of the current drug crisis, insurance companies don’t think twice about covering such costs.

All in all, everything has led to this: we have more prescription pills than people. We have handfuls of gateways to heroin floating willy-nilly throughout this nation. Friends, family, and personal prescription are the means by which users seek pills. The epidemic is strong, and the only way to stop it is to stop the great flood.

How to Stop the Madness

The existence of opioids does not create addiction. Let’s be clear about that. Substance addiction is an extremely complicated condition involving genetic predisposition, stressors, emotional state, availability of substance, who you keep as a company, etc. However, filling up America’s medicine cabinets with powerful opioids is certainly not going to help matters. The best way to stop the current prescription drug crisis, (and then perhaps also the entire drug crisis), is for big pharma, doctors, and insurance companies to all focus on the patient first.

Drug companies need to realize the risks of their products, and not lie about how dangerous they can be. Doctors need to take much more caution when prescribing opioids and should be screening patients for addiction risk prior to writing the scripts. Insurance companies need to further cover the costs of alternative pain treatment methods, including but not limited to physical therapy, acupuncture, massage, gym memberships, and chiropractic practice – all things have proven to help alleviate pain. If big pharma, medicine, and insurance can all see past the dollar signs and look at how painkillers are creating heroin addicts, we can make it out of this. If not, unfortunately, those colorful lines on the graph at the beginning of this article will keep climbing upward.

These gigantic companies love to make money and have long proven to be quite good at it. When people are prescribed opioids, the manufacturer makes money, the insurance company makes money, and the doctors stay employed because patients are satisfied. Then people turn to heroin for many reasons, the main one being cost-effectiveness. Even with good health insurance, medicine can be expensive. Heroin is much cheaper by volume and requires no insurance. Plus people tend to build a tolerance to opioids and eventually need more and more in order to either feel less pain or feel the same high, depending on how responsible of a patient one is.

So, who’s to blame? Everyone is at fault, so essentially nobody is at fault. That would be partially true, but mostly a cop-out. Pointing fingers won’t get us anywhere, but we should acknowledge that big pharma, insurance companies, the medical industry, and the vulnerability of people when it comes to addiction are the four major players at fault. Therefore it’s up to all of us to reverse the tragedy.

Previous:
How to Prepare for Rehab
Next:
How to Choose the Right Rehab